Skip to content
Home Travel A walk ‘ON’ Lake Louise 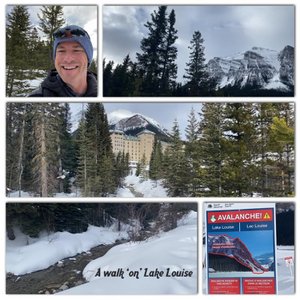 Originally settled in 1884 as a Canadian Pacific Railway construction camp, it was known as Holt City and later Laggan until renamed in 1914 for the lake, which had been “discovered” in 1882 by guide Tom Wilson, who named it Emerald Lake. It was later renamed to honour Princess Louise, daughter of Queen Victoria and wife of the marquess of Lorne (governor-general of Canada, 1878–83).

Since 1892, when the Lake Louise area was added to Banff National Park, the settlement has been administered by various government agencies. It is a famous tourist resort and recreation centre.

The lake usually begins to freeze again in November and then is covered in many feet of snow until the thawing cycle begins again in the late spring.

Lake Louise is excellent no matter what time of year you visit. There is something magical about this fantastic lake with Mount Victoria in the background even in the winter.