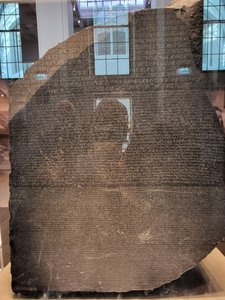 Today was a free day for us but we really wanted to get back to the British Museum. We only saw 2 rooms when we went on Day 1, and we had tickets for a concert at Royal Albert Hall in the evening.

Again, we dressed for the concert. Fortunately, it wasn’t raining so we were able to wear our normal shoes, not the rain gear.

Having been in Greece and Rome this summer, we were most anxious to see the antiquities taken from those countries and brought to the British Museum. Alas, that portion of the museum was closed. But as luck would have it, we did start at the Rosetta stone, much by accident!

We wanted to leave the British Museum at about 3:30, as we had dinner reservations at 4:30 at Royal Albert Hall. 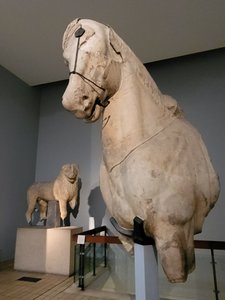 I could only glance longingly at the Vikings exhibit and other early England exhibits and we passed by. Alas, but there is always next week.

We took the tube and walked the remainder to Royal Albert Hall and it was dark when we arrived. We noted several beautiful cars as we walked including a Ferrari near the Hall. We had to wonder what is going on with our lowly Ferrari these days.

Our dinner was in the Italian restaurant. There were gluten free options for nearly every dish so Dale and I did our usual, we ordered different dishes then shared.

The concert was the John Rutter’s Christmas Celebration. John Rutter is a composer and conductor so we were able to hear some of his original compositions as well as carols we have grown up with. 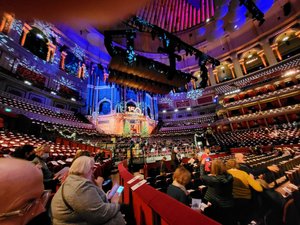 The following day, we had a fairly early morning as we had to be at Hampton Court and wanted to make the most of our day. We had a 1-hour train ride including a 20-min walk to the train station.

Hampton Court is a palace I’ve wanted to go to as it is another place that King Henry and Anne Boleyn and then Jane Seymore stayed at, had her child, a son for Henry, then she died.

Catherine Howard is reported to have run down the hall screaming for King Henry to save her life, and it is in the small room off the chapel that King Henry married Katherine Parr.

Anne Boleyn, once executed was erased, or at least there was an effort to erase her. However, there are places where her initials are still intertwined with Henry’s. There is the hall where King Henry would walk down to his council chambers, here they argued about events of the day, the same hall used by Catherine Howard, and he would walk to the chapel. Good thing King Henry could worship a god after all of the heads that rolled. 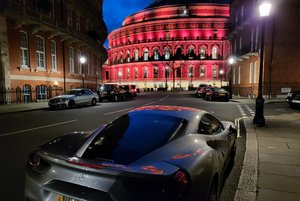 Royal Albert Hall with a Ferrari

had some coffee and cake in the kitchen where Elizabeth 1st would take her meals. We thought that maybe it would be warmer in there but it wasn’t.

The castle was so cold, we could never warm up. But it was a great place to visit. Unfortunately, we had no time to visit the gardens, we could only see them from a window.

We went back to the train station, it’s just over a bridge, maybe a 10-minute walk. As we just missed the train, we had a cappuccino to warm our hands.

When we arrived back in London, we were hungry. We walked he wrong direction and had to turn around going the opposite way, this while using Google maps. We didn’t know what we’d do for food, but we knew there were several restaurants along the river. As it turned out we ran into a weekend food court, much like the Burroughs Market. There were lots of gluten free choices. So, we had Thai and some Venezuela dishes. After eating we got some mulled wine to help us walk home.