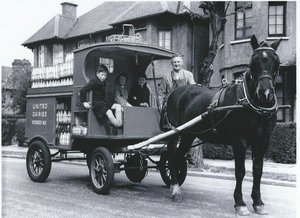 As I grow older, I become increasingly more nostalgic. I frequently look back at my childhood in Reading, a period of my life which now seems almost idyllic. I have already written several essays about growing up in Reading, but I have never written about the variety of tradesmen and other people who passed by our house or came to our front door. For no particular reason, one of them popped into my mind today, and then another one and then some more.

We lived at 36 Hatherley Road in an end-of-terrace house in a working-class neighbourhood. My father bought the house in 1955, and I lived there continuously until going to Leeds University in 1970.

Every morning the milk and newspapers and mail would be delivered. There was no internet, so we relied on the radio and newspaper for news. My parents’ newspapers of choice were the Daily Express and the Sunday Express. These were delivered by a paperboy from Strong’s the newsagents, on the corner of Erleigh and Blenheim Roads. Our milk – Jersey milk in gold- or silver-topped bottles – was delivered from Winterburn’s Dairy, later Chivers’ Dairy, just a stone’s throw away in Hatherley Road. 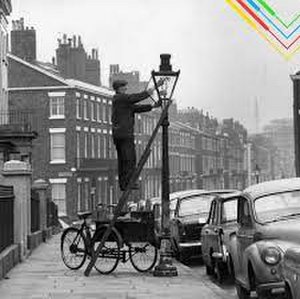 In the 1950s a horse-drawn milk dray – from a different dairy, I think – used to stop in front of our house, and the horse would frequently empty its bowels. At weekends, my father would rush out with a bucket and spade to scoop up the precious manure, which became fertilizer for his mushrooms in the back garden.

Another visitor was the man who lit and extinguished the gas lamps that lined Hatherley Road. There was a lamp just outside our house, and I would see this man, with his ladder and long pole, at dusk and sometimes in the morning. Extraordinary now to think of those gas lamps being lit every dusk and extinguished each morning. A tradition dating back to the nineteenth century. Today, they would be vandalized in no time.

When we first moved into our house, we warmed ourselves in front of a coal or coke fire in the living-room. The coal and coke was stored in a bunker in our back yard. I well remember the coal men with their bulging sacks walking through our living-room and kitchen, dirtying the lino, as they made their way to the bunker. Now and then 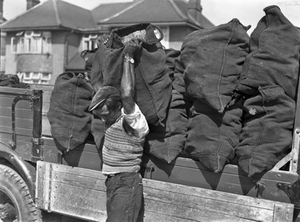 Once a week the dustmen came round to empty our dustbins. Back then you did not have to separate your refuse; everything was thrown into one container. Those were the days before standardized plastic wheelie bins, when dustbins could be any shape or size. They were generally kept out of sight in the back yard, to be placed in front of the house just before the arrival of the dust cart. Hatherley Road front gardens used to be well-tended and floriferous, but today big black wheelie bins are permanently on display – horrible eyesores, in my opinion – and the front gardens are an unsightly mess.

The chimes of the Tonibell ice-cream van were music to my youthful ears. The van – a hideous pink vehicle – often stopped in Hatherley Road, and Mum would sometimes treat us to an ice-cream. In the early 1960s I was a coin-collector and will 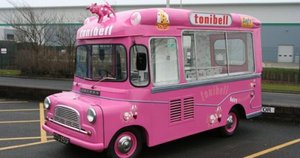 never forget the day I received a Victoria bun shilling, in mint condition, in my change from the Tonibell van.

On Sundays a different musical sound could be heard from the streets – the religious tunes of the Salvation Army brass band. They never congregated in Hatherley Road but, as I recall, in nearby Donnington Gardens. My mother knew one of the musicians, a man called Reg Smith.

The local bobby on his bike was a reassuring sight. In those days policemen had ‘beats’ which it was their job to patrol. Nowadays the police are invisible, only appearing when a crime is reported. With their radios and tasers, they are quite intimidating compared to the friendly helmeted man who rode a bicycle around our neighbourhood circa 1960. The only time I crossed swords with the local bobby was when he spotted me collecting ‘conkers’ (horse chestnuts) from a privately owned field in Addington Road. I was quaking in my boots, but he merely told me not to do it again.

There were gypsies living in and around Reading, and occasionally a gypsy woman would ring our door bell and, rather aggressively, ask us to buy a bunch 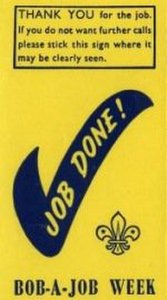 Then there were the door-to-door salesmen with their suitcases full of knick-knacks. Smartly dressed, and with slick patter to match, these salesmen offered housewares of every description and would make a point of visiting during the working day, when housewives were alone. It was a clever marketing trick to target lone housewives while their husbands were at work. I am not sure how Mum coped with them, but when it came to shopping, she was hard-headed and, I suspect, not easily fooled.

Door-to-door salesmen with a difference were the Jehovah’s Witnesses and Mormons spreading the word of God. They usually came as a group, and they were always men, often Americans. I remember how polite and well-dressed they were. My mother always sent them packing with her stock response: “I’m sorry but we are Roman Catholics in this house.” They never had an answer to this. With my dad, it would have been different: he would have invited them in and initiated a debate about the non-existence of God.

Every year the Wolf Cubs and Scouts had their bob-a-job week. I was a Wolf Cub for a short time and so cornered the market, as 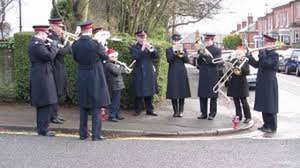 it were, in our house. Other Wolf Cubs knocking at our door were politely sent away. I remember the sticker on our front room window, indicating that our house had been ‘done’.

At Xmas the carol-singers would come to our door. Mum was a generous soul and always gave them sixpence for their efforts.

In election years, representatives of the main parties – the Tories, Labour and Liberals – rang our door bell to drum up support. My father always gave them a hard time, grilling them about their Northern Ireland policy. As a Limerick man and IRA supporter, he wanted to know when, if ever, Ulster would be given back to Ireland.

How times have changed. Most of the traders and other people I have mentioned no longer exist. The lamp-lighter, the horse-drawn milk dray, the coal man, the chimney-sweep, the door-to-door salesman, the gypsy woman, the ice-cream van, the Salvation Army band – all of these have gone. Now people do their shopping at giant supermarkets, have central heating and use their mobile phones to summon tradesmen. Life is certainly easier and more comfortable today than it was back then but, at the risk of being labelled a reactionary old fool, I have to say that the modern world is awfully bland compared to the quasi-Victorian 1950s. Perhaps I am simply pining for my lost youth, when life was an exciting adventure and I was being cared for by Mum and Dad, but it seems to me there really was more variety and colour in the England I grew up in. Life in Hatherley Road circa 1958 had more character, and more characters, than it has in 2021.