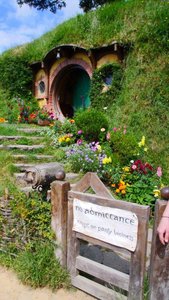 When we moved to New Zealand one thing that was sure from the beginning is that we had to visit Hobbiton. There was no way around it.

I was more than surprised to see how many of the Hobbit houses we were able to visit on the tour, also only from the outside. They even have a pub called the Green Dragon. This Hobbit facility you could actually go inside to order food or to have a drink. We got a couple of ciders and set in the pubs garden, since the weather was very nice in the midst of this December afternoon.

The tour we took was very informative and they explained quite a bit of background on filming both Lord of the Rings and the Hobbit. We visited all the hobbit houses from the movies, most of them had two versions. One life sized one for when they were filming the hobbits and a smaller 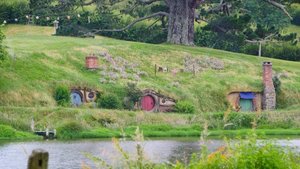 version for when Gandalf was around. Later on in our trip we also visited the Weta Workshop in Wellington, where they created most of the characters. We have visited various other Lord of the Rings film locations around New Zealand, also most of them I would have not recognized from the films. I am guessing a lot of digital effects were added later on.

Should you ever be in the area I feel visiting Hobbiton is an absolute must on your to do list. We really enjoyed our day trip to this unique film set.