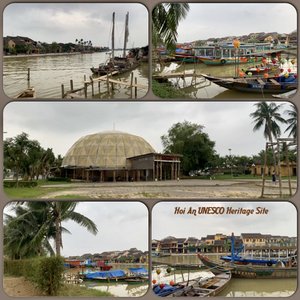 Hoi An Ancient town is located in Viet Nam’s central Quang Nam Province, on the north bank near the mouth of the Thu Bon River.

It is a well-preserved example of a small-scale trading port active during the 15th to 19th centuries which traded widely with the countries of Southeast and East Asia and with the rest of the world.

It was a dull rainy day but the colourful boats along the waters edge made up for the grey skies. We walked across the lantern bridge and then the Japanese bridge and the colours continued with a Chinese Temple, colourful houses, local markets selling their wares.

This was Huy’s 2nd tour, he had responded well to requests for some tours to be suitable for European time zones,experience handling the gimbal will come in time, his English is excellent and I look forward to discovering more with him.