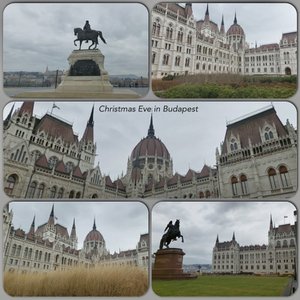 It was a grey damp morning outside the beautiful Parliament Building but Adam with his story telling and wonderful sense of humour brightened up the day as he walked and explained the traditions of Christmas in Hungary.

When the Soviet-backed Communist Party came to power in Hungary after the Second World War, The Communist Party was on a direct collision course with Christmas, a holiday that brought together many Hungarians each year to contemplate and reflect on their faith.

Christmas represented a tradition far older than the regime. According to tradition, the first king of Hungary, St. Stephen, was crowned on Christmas Day in 1,000 AD.

Christmas was already associated with the sort of commercialized capitalism that Communist dogma frowned upon.

The three major sins of Communism — religion, tradition, and capitalism. The simple solution would have been to ban celebrations and try to erase Christmas from history.

While they succeeded in publicly converting Christmas into a Communist-flavored secular holiday, they failed to convert the hearts of the Hungarian people. The gradual loosening of the rules from the late 1960s onward was an admission 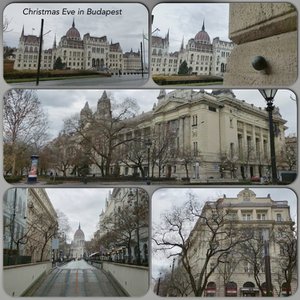 Christmas Eve is very important and is called ‘Szent-este’ which means Holy Evening. People spend the evening with their family and decorate the Christmas tree. Often it is the father/husband who erects the tree and the mother/wife who decorates it. When the children come in and see the tree, it’s a great surprise and they are told that angels brought the tree for them!

Hungarian Christmas trees would not be complete without Christmas candy (szaloncukor) which comes with different fillings, covered in chocolate and wrapped in colourful foil. The origin of this confectionery, similar to bonbons, is fondant sugar from France, which became popular in Hungary in the 1800s. Wealthy families welcomed their guests in their parlour (“szalon”) with small bowlfuls of this delicacy. Hence the name “szaloncukor” (salon sweet).

The main Christmas meal, which is also eaten on Christmas Eve, consists of fish, often fish soup, stuffed cabbage leaves and for dessert a special kind of poppy bread/cake called ‘Beigli’. The two kinds of filling fit in the symbolism of Christmas perfectly because poppy seeds symbolize wealth and fertility, while walnuts protect against bewitching. Today there are many 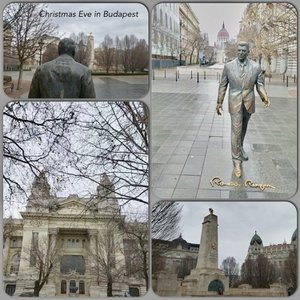 different fillings like chestnuts, marzipan, and even apple, coconut and hazelnut fillings.

On Christmas Eve children hope that they will be left some presents under the Christmas Tree. They are told that the presents are brought by Jesus

St. Nicklaus visits Hungary but not until the 6th December. Children leave out their polished shoes or boots on a windowsill to be filled with goodies!