The leader of the Islamic State (IS/ISIS), Abu Ibrahim al-Hashimi al-Qurayshi, died in a U.S. counterterrorism operation in Idlib province, in northwestern Syria, President Joe Biden announced on Thursday. The death is a serious blow to the terrorist group, whose capabilities have been severely degraded and dispersed, since coalition forces destroyed their ‘caliphate’ about three years ago.

“Last night at my direction, U.S. military forces successfully undertook a counterterrorism operation. Thanks to the bravery of our Armed Forces, we have removed from the battlefield Abu Ibrahim al-Hashimi al-Qurayshi — the leader of ISIS,” Mr. Biden tweeted. 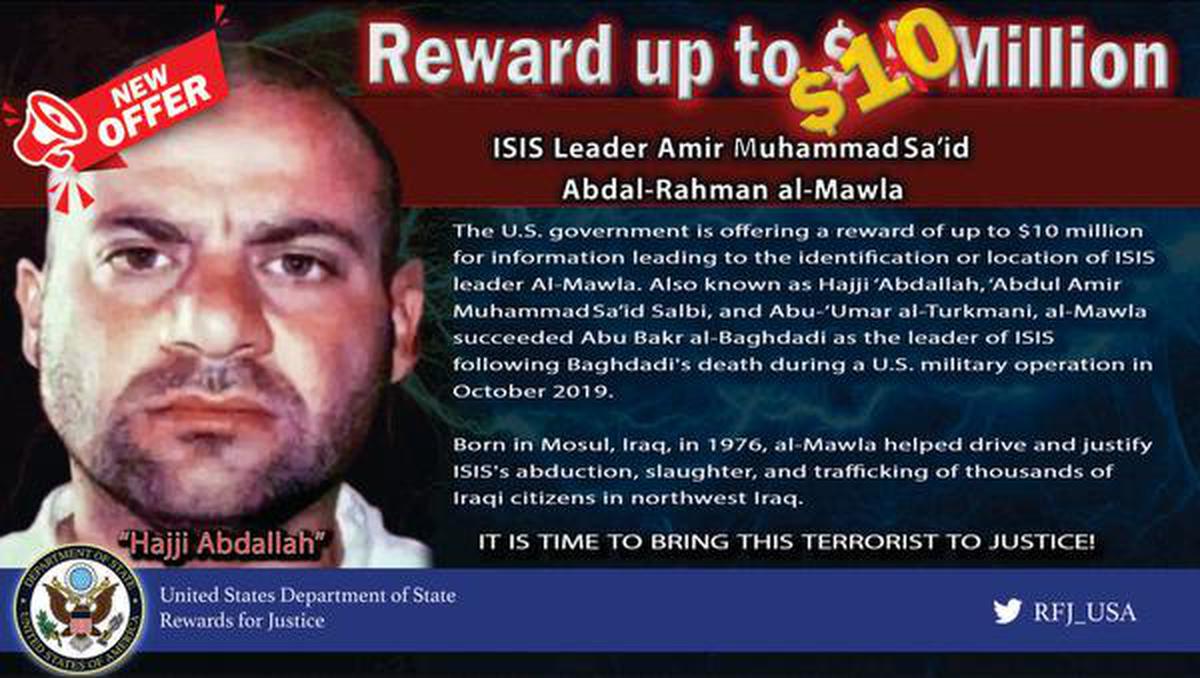 This file image released by the U.S. Department of State on July 17, 2020, shows the English version of a Reward announcement for information on the location of IS leader Amir Mohammed Said Abd al-Rahman al-Mawla — aka bu Ibrahim al-Hashimi al-Qurashi.

Speaking at the White House on Thursday morning (Washington DC time), Mr. Biden said: “We all remember the gut wrenching stories, mass slaughters that wiped out entire villages, thousands of women and young girls sold into slavery, rape used a weapon of war,” and that “this horrible terrorist leader is no more”.

On January 10, the group had attacked a prison in the northeast Syrian town of Hasakah, which houses at least 3,000 IS prisoners, in an apparent attempt to set them free. Mr. Biden also said the U.S. counterterrorism operation sent a strong message to terrorists around the world. “We will come after you and find you.”

The American press reported that Qurayshi exploded a bomb that killed him and some of his family members, including women and children, as U.S. special forces were approaching them. Qurayshi’s predecessor, Abu Bakr al-Baghdadi, had also killed himself using a suicide vest under similar circumstances in October 2019.

Thirteen people, including six children and four women, were killed in the Idlib raid, according to early reports carried by the Associated Press.

Reports also said there was a two-hour gun-battle after U.S. forces landed in helicopters and targeted a house outside Atmeh, near the Syira-Turkey border in Idlib.

Mr. Biden — whose administration was under fire for the killing of innocent civilians, including children, in a drone strike in Kabul in August — said the Americans knew that Qurayshi had surrounded himself with children and women, so U.S. Special Forces were deployed, at greater risk, rather than using an airstrike for the operation.

The Pentagon released a statement saying there were no U.S. casualties. Mr. Biden thanked the U.S.-backed Syrian Democratic Forces, in addition to U.S. forces and their families.

The White House and Biden tweeted a photograph of the President, Vice-President and others at a desk, apparently watching a screen — the White House said it was a shot of them watching the counterterrorism operation. The photograph was reminiscent of a May 1 2011 shot of former U.S. President Barack Obama, then Vice President Biden and others in the Situation Room, watching the operation in Abbottabad, Pakistan, that killed Osama bin Laden.

Auto Collision Center – What You Need To Know

Who is Alex Aniston, Jennifer’s brother?

Explain the mystery of Ramneek Sidhu