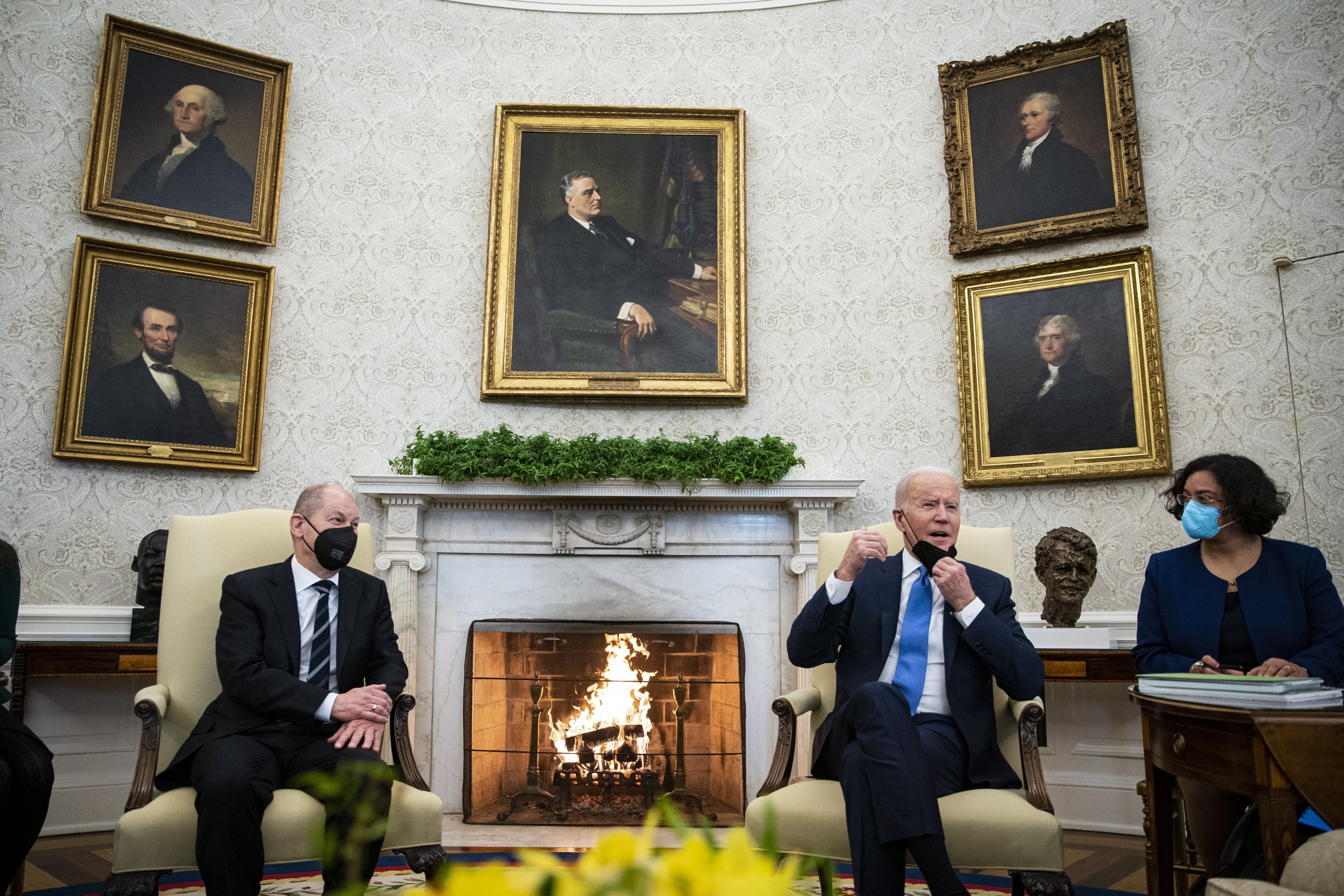 The United States, Germany and NATO are ready to respond should Russia invade Ukraine, U.S. President Joe Biden said on Monday during a joint news conference with German Chancellor Olaf Scholz at the White House.

Biden also warned that if Russia invades Ukraine, there will be no Nord Stream 2. Europe’s most divisive energy project, Nord Stream 2 is designed by Russian energy giant Gazprom to double the amount of gas flowing from Russia straight to Germany, bypassing traditional transit nation Ukraine.

“If Russia invades — that means tanks or troops crossing the border of Ukraine, again — then there will be no longer a Nord Stream 2,” Biden said.

“I promise you, we will bring an end to it.”

Biden warned that it would be a “gigantic mistake” for Russian President Vladimir Putin to make any military moves against Ukraine.

“He has to realize that it would be a gigantic mistake for him to move on Ukraine. The impact on Europe and the rest of the world would be devastating, and he would pay a heavy price.”

Biden reiterated that Washington would impose severe sanctions on Russia if Putin decided to invade Ukraine, which he said would affect the U.S. and European nations as well, “but it will have a profound impact on his economy.”

Biden also that Germany was a reliable ally amid criticism that Berlin is not fully engaged with U.S.-led efforts to push back against Russian military pressure on Ukraine.

“There is no doubt in America’s mind that Germany is an incredibly reliable ally,” Biden said and added there is no need to win back Germany’s trust.

Germany and the United States have been working closely together to ensure sanctions can be imposed quickly on Russia in the event of a fresh attack on Ukraine, Scholz said for his part.

“It will have very high costs for Russia,” he added.

The United States and Germany are “in lockstep” on confronting Russia over Ukraine, Biden also said earlier Monday at his meeting with Scholz.

“We’re working in lockstep to further deter Russian aggression in Europe,” as well as in meeting “challenges posed by China,” Biden said in the White House’s Oval Office.

Scholz, on his first trip to the White House since assuming charge from longtime German leader Angela Merkel, said the two countries were the “closest allies and working intensely together.”

The German chancellor said he and Biden’s tasks included “fighting against Russian aggression against Ukraine. So it’s an important meeting at a very, very important time.”

Germany’s new government has come under criticism from Ukraine and some in the U.S. over accusations that it is not fully engaging with U.S.-led efforts to push back against Russian military pressure on pro-Western Ukraine.

At the helm is Germany’s decision not to join the U.S. and other NATO allies in Europe in sending weapons to help Ukraine’s military and questions over whether Germany is willing to shelve a major pipeline due to start shipping natural gas from Russia as part of severe Western sanctions.

However, Scholz is using his Washington visit to smooth over differences.

“We are close allies and we act in a coordinated and united way when it comes to responding to the current crises,” Scholz told reporters earlier Monday, saying Russia would pay “a very high price” if it attacks Ukraine.

White House Press Secretary Jen Psaki said Germany is of “huge strategic value to the United States” and “today is an opportunity for the president to build on the relationship.”

Asked about the pipeline, known as Nord Stream 2, Psaki said the U.S. position was clear – that it “should not move forward if Russia invades.”

Europe is facing its most serious security threat since the Cold War, EU Foreign Policy Chief Josep Borrell warned earlier Monday, while still voicing hope for a diplomatic resolution to the standoff with Russia over Ukraine.

Questioned over U.S. warnings of an imminent Russian invasion of Ukraine, at a joint news conference in Washington with Secretary of State Antony Blinken, Borrell said they shared “a strong concern” about the situation on the ex-Soviet state’s borders.

“We are living, to my understanding, the most dangerous moment for security in Europe after the end of the Cold War,” Borrell told reporters.

“Nobody masses 140,000 heavily armed soldiers at the border of a country” without it representing “a strong threat,” he said.

“140,000 troops massed in the border is not to go to have tea,” Borrell underscored.

U.S. officials say Moscow has assembled 110,000 troops near the border with Ukraine and is on track to amass a large enough force – some 150,000 soldiers – for a full-scale invasion within weeks.

Blinken denied Washington’s stance as alarmist, saying: “This is not alarmism. This is simply the facts.”

Both the United States and European Union are threatening to retaliate with unprecedented economic sanctions should Russian President Vladimir Putin move ahead with an invasion of neighboring Ukraine.

“We don’t believe that Mr. President Putin has made a decision, but he has put in place the capacity, should he so decide, to act very quickly against Ukraine, and in ways that would have terrible consequences for Ukraine, for Russia, but consequences also for all of us,” said Blinken.

Nevertheless, both Blinken and Borrell stressed that diplomacy was still hard at work to bring the standoff to a peaceful resolution.

“We believe that a diplomatic way out of the crisis is still possible,” summed up Borrell. “We hope for the best but we prepare for the worst.”

“No one, no matter how hard anyone tries in Russia, will be able to drive a wedge between Ukraine and its partners,” Kuleba said at a press conference with his German counterpart Annalena Baerbock in Kyiv.

French President Emmanuel Macron on Monday held talks at the Kremlin with Russian leader Vladimir Putin in a bid to try to de-escalate fears Moscow could be planning a full-scale invasion of Ukraine.

European leaders are scrambling to ease the crisis on the continent’s eastern fringes, but have warned the Kremlin of “massive consequences” if it stages an incursion almost eight years after seizing Crimea from Kyiv.

“We have therefore jointly prepared a series of tough measures against Russia for this eventuality; these sanctions are unprecedented and have been coordinated and prepared with all partners,” Baerbock said.

“We are also prepared to pay a high economic price ourselves because the security of Ukraine is at stake.”

At the same time as stationing over 100,000 troops on the border, Putin has demanded security guarantees from NATO and the U.S., including that Ukraine is never allowed to join the Western military alliance.

Kuleba laid down Kyiv’s “red lines” in finding any solution to the crisis, insisting only Kyiv could be allowed to determine Ukraine’s foreign policy course.

“It’s no use trying to scare Ukrainians with war. We have been fighting a war since 2014,” Kuleba said.

“We are ready for anything.”

Moscow is trying to pressure Ukraine to offer concessions to Russian-backed separatists who have been fighting Kyiv since 2014 in a conflict that has cost over 13,000 lives.

Ukraine insists the Kremlin wants to use the two breakaway regions it supports as leverage to keep the country under Moscow’s sway.

When And How You Can Style Music Band T-Shirts

Professional Product Photography, Services- Everything You Need To Know

Hotel Linen Service Near Me – Things You Need To Know

Toronto Wedding Photographer – Things To Know Before Hire Them