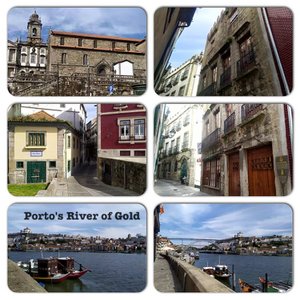 Porto’s riverside quarter, known as the Ribeira, is one of the city’s oldest neighbourhoods and certainly one of its highlights. The area was designated a UNESCO World Heritage Site in 1996 and it does not disappoint.

Historically the quayside here was one of the busiest points on the River Douro with cargo from both up and down-stream landed here before the short journey to the centre of the city. Today it is equally bustling but the major trade here is now tourism.

The waterfront (Cais da Ribeira) is long strip of cafes, restaurants and shops overlooking the river and the Port houses. Many of these businesses are housed in what would once have been single-storey warehouses whilst above and behind are a row of colourful, if not a little faded, houses. Many of these old buildings, some of which are six storeys high are still home to the local population and you will often as not see washing drying off the balconies. 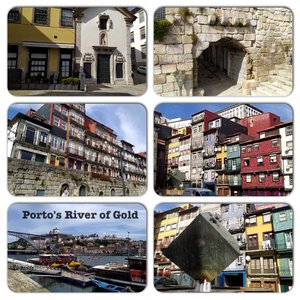 river using a makeshift pontoon bridge made from around 20 old port boats lashed together by steel cables. The ‘Ponte das Barcas’ (Bridge of Boats) as it was known was built in 1806 and you can in fact still see the old pillars right next to the Dom Luis I bridge. Back in those days the crossing was made all the more precarious by the fact that the river was somewhat wilder as there were no dams upstream to calm the flow. Disaster struck in 1809 when, during the Peninsula Wars, Napoleon invaded the city. Fleeing residents rushed to the Ribeira and onto the bridge to escape. The old boats couldn’t take the weight of the crowds and many were drowned that day. If you look closely there is a shrine-like monument close to the bridge, the Alminhas da Ponte, to those who died that day.