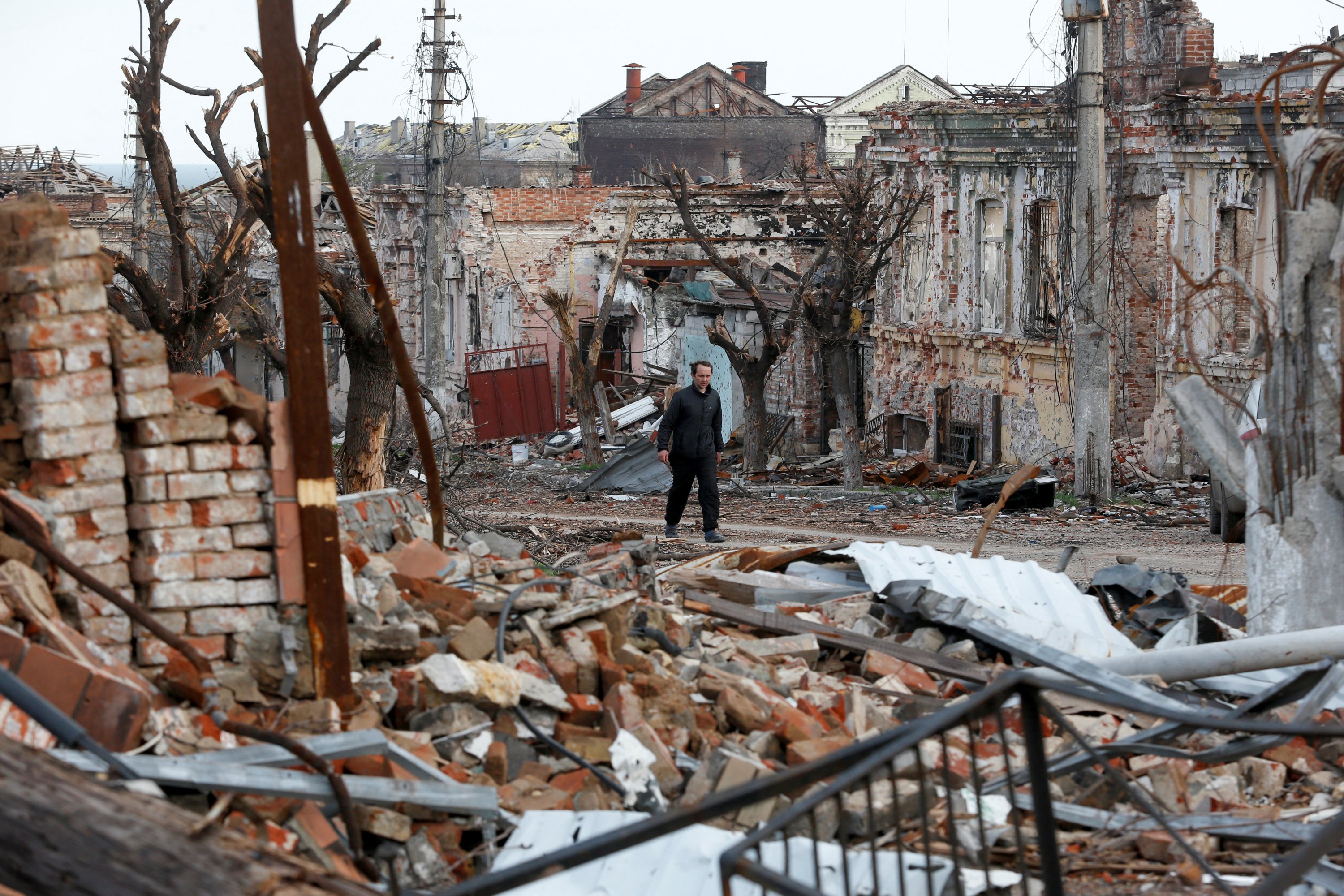 Ukrainian authorities claimed Friday that the Russian military shifted a dozen units from the destroyed port city of Mariupol to eastern Ukraine.

Meanwhile, Russia reported that one soldier was killed and 27 others were left missing after the fire on board the warship Moskva, which sank a week ago following what the Ukrainians boasted was a missile attack. Moscow previously reported everyone aboard had been rescued.

The Russian Defense Ministry did not acknowledge an attack on the ship. It continued to say a fire broke out after ammunition detonated, without explaining how that happened. The loss of the guided missile cruiser – the flagship of Russia’s Black Sea fleet – was a humiliating setback for Moscow.

In Mariupol, reduced largely to smoking rubble by weeks of bombardment, Russian state TV showed the flag of the pro-Moscow Donetsk separatists raised on what it said was the city’s highest point, its TV tower. It also showed what it said was the main building at Mariupol’s besieged Azovstal steel plant in flames.

The Kremlin has thrown over 100,000 troops and mercenaries from Syria and Libya into the fight in Ukraine and is deploying more forces in the country every day, said Oleksiy Danilov, secretary of Ukraine’s National Security and Defense Council.

“We have a difficult situation, but our army is defending our state,” he added.

Numerous cities and villages came under bombardment in Donbass – the industrial region in the east that the Kremlin has declared the new, main theater of war – as well as in the Kharkiv region just to the west, and in the south, authorities said.

Russian forces pummeled an estimated 2,000 Ukrainian fighters holed up inside the sprawling Azovstal plant, the last known pocket of resistance in the strategic southern port city, the mayor’s office reported.

“Every day they drop several bombs on Azovstal,” said Petro Andryushchenko, an adviser to Mariupol’s mayor. “Fighting, shelling, bombing do not stop,” he added.

A day earlier, Russian President Vladimir Putin declared victory in the battle for Mariupol despite the steel-mill holdouts. He ordered his forces not to storm the plant to finish off the defenders but to seal it off instead in an apparent bid to force them to surrender.

Mariupol has taken on outsize importance in the war. Capturing it would deprive the Ukrainians of a vital port and complete a land corridor between Russia and the Crimean Peninsula, which Putin seized from Ukraine in 2014.

It would also enable Putin to throw more of his forces into the potentially climactic battle for Donbass and its coal mines, factories and other industries, or what the Kremlin has now declared to be its main objective.

Danilov reported that some 12 to 14 of Russia’s elite military units have, in fact, left Mariupol and begun moving to the east to take part in the fighting there.

“It will now be difficult for our forces, because our guys in Mariupol were taking (those units) on themselves. It is their courage and feat,” he said.

Danilov also said Kyiv was able to deliver weapons via helicopter at great risk under cover of night to the Mariupol steelworks, which have been bombarded for weeks.

Putin said Russia gave Ukrainian forces inside the plant the option to surrender, with guarantees to keep them alive, and offered “decent treatment and medical care,” according to an account of a phone call with European Council President Charles Michel, provided by the Kremlin.

“But the Kyiv regime does not allow them to take this opportunity,” Putin said.

More than 100,000 people – down from a prewar population of about 430,000 – are believed trapped in the city with little food, water or heat, and over 20,000 civilians have been killed in the nearly two-month siege, according to Ukrainian authorities.

Repeated attempts to evacuate civilians from the city have failed because of what the Ukrainians said was continued Russian shelling.

Ukrainian Deputy Prime Minister Iryna Vereshchuk said no humanitarian corridors for civilian evacuations would be open in Ukraine on Friday because it was too dangerous. She urged civilians to “be patient” and “hang in there.”

Days into the Russian offensive to take the east, the campaign has yet to become a full-out assault, with military analysts saying Moscow’s forces are still ramping up and have yet to achieve any major breakthroughs in Donbass or gain any significant ground.

But shelling attacks killed three civilians in a small town and two villages Friday in the Donetsk region, which is part of Donbass, the regional governor, Pavlo Kyrylenko, posted on a messaging app. Kyrylenko said the Russians opened fire on at least 20 settlements in the region.

Slovyansk, a city of about 100,000 in eastern Ukraine, came under fire during the night, according to the mayor, who said no injuries were reported but urged residents to leave via bus convoy. In Rubizhne, Russian fire prevented attempts to bring buses in, the regional governor said.

Intensive shelling was also heard overnight in Kharkiv, a northeastern city that lies outside the Donbas but is seen as one of the gateways the Russians intend to use to encircle Ukrainian forces in Donbass from the north, south and east.

In other developments, Russian Foreign Minister Sergey Lavrov said talks between the two countries have “ground to a halt” because Moscow hasn’t received a response from Kyiv to its latest proposals, the details of which have not been released.

Putin’s lead negotiator at the talks, Vladimir Medinsky, said he held several lengthy conversations Friday with the head of the Ukrainian delegation. He gave no details.

Also, Rustam Minnekayev, a senior Russian military official, publicly outlined Russian war aims that appeared to be wider than what the Kremlin has stated in recent weeks. He said Russia’s forces aim to take full control of not just eastern Ukraine but southern too.

He said such a move would open the way to the nation of Moldova, where Russia backs the breakaway region of Transnistria. Moldovan officials are warily watching Putin’s actions in Ukraine.

On Thursday, satellite photos from Maxar Technologies revealed what appeared to be rows upon rows of more than 200 freshly dug mass graves on the outskirts of Mariupol, prompting accusations that the Russians are trying to conceal the slaughter of civilians taking place in the city.

Initial estimates from the Ukrainians said the graves could hold 9,000 bodies.

There was no immediate reaction from the Kremlin to the satellite pictures.

“Over these eight weeks, international humanitarian law has not merely been ignored but seemingly tossed aside,” U.N. High Commissioner for Human Rights Michelle Bachelet said.