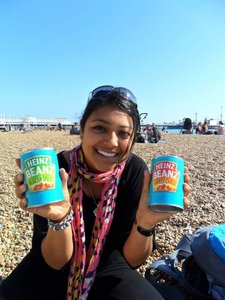 If anyone has ever been to Brighton you know that its not the most beautiful beach in the world. Sure it makes for a nice day trip from London on a warm summer day, which we only get a few of a year, but would you ever consider to spent the night sleeping on this pebble beach?

This is exactly what my friend talked me into a couple of years ago. We both were broke Au Pairs working in London and were in absolute need of a getaway. But where do you go when have almost no money to spend?! A bus trip to Brighton didn’t sound like a bad idea, also I did not intend to spend a night on the streets.

My friend Shiki was more optimistic and thought this would be an amazing idea. During the day we went for a walk on the beach and even met a nice guy from the Couchsurfing Community who joined us for a small picknick at the waterfront. When he heard that we were planning to sleep on the beach he strongly suggested not to do so and
even offered for us a spot on the couch at his 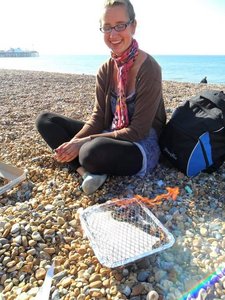 place. Shiki however politely declined and added that we would go through with the original plan for the experience. I was not too convinced, but apparently that didn’t matter.

Once the sun started setting it was also getting colder. Temperatures dropped from a nice 25C to almost 6C during the night. We ended up spending our last money on a few pints at the local pub until they closed around 11pm. From there we walked back to the beach and finished off another 2l bottle of cider we got from the supermarket earlier. In a pretty good mood, having some pretty deep conversation we decided after a few hours sleeping on the beach was not the brightest idea and so we moved into town. After walking around aimlessly we found a pretty acceptable alleyway to sleep in.

The night was rough to say the least, while I did bring my sleeping bag Shiki didn’t. The constant noise of the seagulls flying by and party goers on their way home kept us up all night and at around 5am we decided it was time to move. We got one coffee to share at the local Mc Donald as an 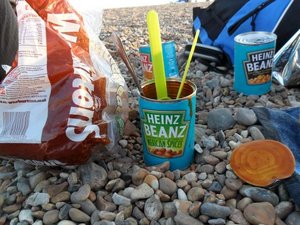 excuse to use their bathroom to freshen up.

The rest of the day was spent on the beach warming up around a disposable grill and eating bakes beans from Poundland. I was quite surprised how much variety they had in their baked bean selection.

All in all I would not recommend sleeping on the beach in Brighton, but in hindsight it had been a little adventure and to this day this story gets passed on by me and Shiki when ever we meet fellow travelers.