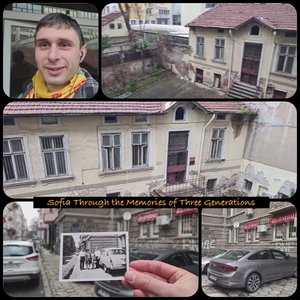 Lubo started his tour at the rear of his home, a view that only the residents would see.

The front of the building was the first memory lubo shared of time gone by with his parents and grandparents alongside their car, now a vintage model. The area had several embassies.

We came to Crystal Park garden named after a hotel bar now closed. The park is an open-air art centre & gathering place, particularly for bench parties which was interesting to learn about.

In the same garden, not far from the place of his murder, a monument to Stefan Stambolov. Stambolov ranks among the most remarkable Bulgarian politicians and statesmen of all times, and prime-minister of Bulgaria in the period 1887–1894. More than 120 years after his death, Stefan Stambolov still divides the nation. For some, he was a cunning politician and a patriot who promoted Bulgaria’s political and economic independence in the first years after the liberation from the Ottomans. He was a fierce opponent of Russia’s meddling in Bulgaria’s internal affairs. For others, Stambolov was a bloody tyrant who decimated the opposition, banned newspapers and used violence at election times.

We heard about the last 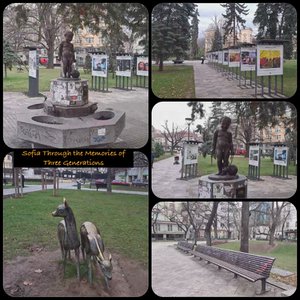 king of Bulgaria Simeon Saxecoburggotski, reigning as a child from 1943 to 1946 as Simeon II.

In 1946 the monarchy was abolished by referendum, and Simeon was forced into exile. Later, He served as Prime Minister of Republic of Bulgaria from 2001 to 2005.