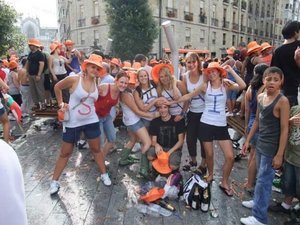 When it comes to Spanish Fiestas most people probably heard about the Running with the Bulls in Pamplona or Tomatina in Valencia. But did you know that most of Spanish town have their own little Fiestas?

In 2009 I spent a full summer working as an Au Pair in a small town in Norther Spain called Vitoria Gasteiz. While Gasteiz is the capital of the Basque Country, it is still lesser known than its neighbors Bilbao and San Sebastian. But none the less it is a beautiful little town and every August people get together here and celebrate for a whole week. And it is awesome.

On the 4th of August every year everyone meets at the main square La Virgen Blanca and it is packed. For some reasons they are giving out orange hats, which makes for some great pictures. Everyone who comes to the square holds a bottle of cheap prosecco in their hands, but this is definitely not for drinking.

At exactly 6pm suddenly a puppet is released from the church tower and ziplines across the whole square holding an umbrella. Still haven’t figured out why. At this minute you hear corks popping everywhere and 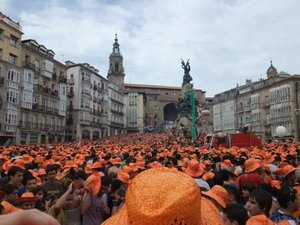 people start spraying each other with prosecco, it is a lot of fun, but also very messy.

Since I lived not to far from the town center, my friends and I went for a quick shower only to shortly after get back out to join the crowds. From now on for the next five days people will roam the streets and hit the bars day and night. There were drunken parades, dancing and other random activities.

One day I had a bit too much to drink and ended up joining one of the parades. The guys all in their traditional uniforms made sure I always had enough to drink while walking along loads and loads of other people all around town. There even was a small van that held barrels of beer and Calimucho ( a mix of red wine and coca cola).

Even though I don’t remember much from that day, I must have introduced myself to literally everyone in town, as the next day when I was out for coffee with friend random Spanish guys came up to me greeting me by name. I guess I must have had a pretty good time celebrating the 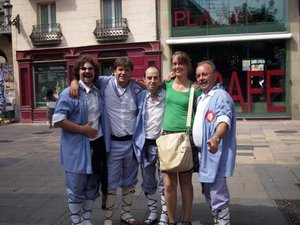