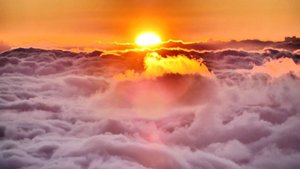 Amazing sunset
Mauii is one of the most beautiful places I have visited so far. We stayed at the Banana Bungalow Hostel for 5 days. One of the perks staying here was that they offered free tours with different activities.

One of the days we joined a tour that was supposed to take us up the Haleakala, one of the biggest crater volcanos, that is now dormant. The plan was to hike through the crater, which would have been an 8h hike. Unfortunately due to the weather conditions that day it was not possible to do the hike. When we arrived at the visitor center the winds were very strong and due to the fog you were not able to see anything.

Instead we went to a lavender farm, which was probably equally as exciting. Not really, but it was still interesting to learn about all the different lavender that there is. Later that day we drove up the volcano again as the weather had cleared up. Too late to start the hike so we decided to try to catch the sun set from up there and it was incredible. It was probably the most beautiful sun sets that 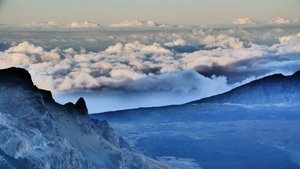 Views from the volcano

I have ever witnessed in my life. Again it was over very quickly, but we managed to snap some amazing pictures.

After the sun had set we stayed a while longer to watch the stars, since this is one of the best places in the world to star gaze. But with our luck the view of the stars was suddenly interrupted by a very bright light from the other side. First we though it was another car, but to our surprise on the other side of the volcano popped up a supermoon. Which was also an amazing phenomenon, but kind of ruined my idea of a stary night.