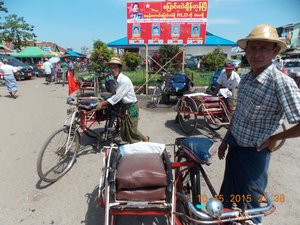 From Economic Intelligence: What goes into an evaluation of whether or not a city is safe? Crime? Personal liberty? Dangerously dirty air? Bad weather brought on by climate change? The Economist Intelligence Unit released its biennial Safe Cities Index, which attempts to answer the question. According to the index, the world’s most dangerous city is Yangon, the largest city in Myanmar.Formerly known as Rangoon, its colonial name, Yangon was on my travel radar a few years ago. It was finally designated as safe for tourism, the house imprisoned Aung San was released, and voted back into power with her political party.
1. Yangon, Myanmar

> Environmental security score: 45.3 — 7th lowest out of 60 cities
Let me tell you a little about our trip there back in October 2015.I wrote this during our (me and 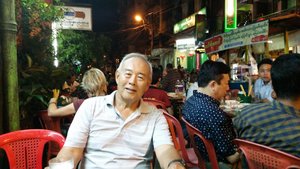 Mr. Mike) visit there: We started in Rangoon, or as locals prefer, Yangon, the capital. We had an excellent, English-speaking guide (pictured with Mr. Mike) who not only gave us an insider’s tour of Yangon but answered a plethora of questions about life in Myanmar from us. Mostly, we saw people enjoying their leisure time, as restaurants in places such as Chinatown were bustling into the wee hours of the night. The revelry would remind anyone of Bangkok, Hanoi or Singapore. We enjoyed the atmosphere immensely.We stayed at the nicest hotel in Yangon, drank our fair share of cold beer, and enjoyed some tasty local cuisine (pictured above). And although the locals were nice, there were certain questions they would not answer. And they had even more questions about life in America.Yet, despite uncensored books being sold on the streets, the heavily armed military was everywhere. It feels and acts like a Third World country despite the newfound democracy and freedom of speech. Mike and I did not encounter any problems, fortunately.Maybe because we were Americans, they viewed us differently. People were friendly, spoke enough English, and we always felt safe. 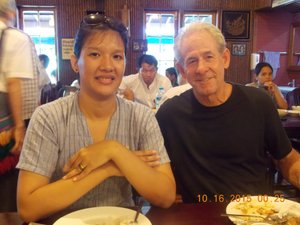 Mr. Mike with our guide in Yangon

Apparently, we only saw the surface. Perhaps out in the countryside, we would get a better glimpse of life here. We spent most of the afternoon on a nearby island riding a modified rickshaw-bicycle contraption (pictured above) with mostly local people, very few tourists. Again, everyone appeared happy, though living conditions were challenging, to say the least.Today, I wonder if we should have visited. They say most of the money tourists spends ends up in the hands of the military rulers. With so many ethnic groups endangered, and the military in serious attack and kill mode, I cannot imagine returning any time soon.It never feels good to know that we helped the enemy. How does one every know when visiting a Third World country? The people we met were friendly, welcoming to Americans, and hopeful of a better future. Though I never felt any danger, both Mike and I were always on alert. We used local transportation, cabs, and trains. We ate at local places, browsed local shops in the city, and the country. It seemed like such a charming place that retained its ethnic roots and traditions.We were terribly wrong!