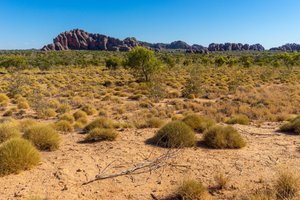 It was a lively night in the bar last night. I was able to watch my beloved Blues enjoy an unexpected triumph on one of the big TV screens. I raised my arms in jubilation at the end of the game and then did a mini-jig in the middle of the room … and no one batted an eyelid. As we walk into breakfast this morning someone’s hosing out the bar. The door to the ladies’ toilet is front and centre. It’s adorned with a colourful “Sheilas” sign, and there’s a pair of buffalo horns mounted on the wall above it. The mens’, by contrast, is down the end of a dark corridor and has a very small and respectable looking ”Gentlemen” sign perched discretely above its entrance. I’m not quite sure what message we should be taking from this…..

Today we head off for an overnight stay out at the Bungle Bungles, which are about a one hour plane flight south of Kununurra, and are the main feature of the Purnululu National Park. We’re joined by three other fellow expeditioners. Pat and Kathy are fellow refugees from the southern winter, from Orange in the southern highlands of New South 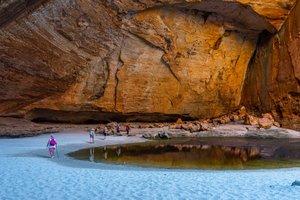 Wales. Yvonne is from the Gold Coast. She tells us that she’s just turned 80 and is travelling around the country by herself in a caravan. Huh? What is it with these not so young women and solo travelling through the remote outback. We thought that Jane from a couple of days ago was crazy enough, but this lady’s twenty years older. Haven’t any of these people seen “Wolf Creek”? (For the uninitiated this was a movie based loosely on the true story of British backpackers Joanne Lees and Peter Falconio. They were attacked in their campervan in central Australia in 2001, and Falconio was dragged away never to be seen again.) Issy asks Yvonne if her children worry about her, but she says they’re mostly just jealous.

We got an email from the tour company yesterday asking us how much we weigh. The fine print said that if we were out by more than 15% they reserved the right to kick us off the flight. We haven’t weighed ourselves since we left home, so I gave them our weights from then. We do however seem to have been consuming an awful lot of food while we’ve been away, 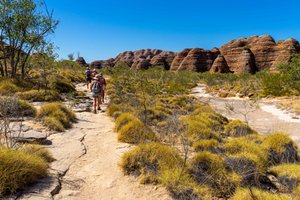 so hopefully they’ll let us board. They seem very trusting; they don’t weigh us again before climb into our seats. I hope the plane doesn’t fall out of the sky.

Our pilot Matt flies us up over the heavily irrigated Ord River valley and then on over Lake Argyle. He tells us that the dam wall was raised recently and the lake’s capacity is now more than twenty times that of Sydney Harbour. Perhaps unsurprisingly it’s now the country’s largest freshwater body. The site of the original Durack property (of “Kings in Grass Castles” fame) is under the lake somewhere, and the buildings themselves were relocated before the dam was built. The Duracks took a couple of years to get here overland from Queensland, arriving in 1882, and were the first to establish a pastoral operation in this neck of the woods.

We pass over the Argyle diamond mine which we’re told only ceased operations last year. It sounds like there was a bit of subterfuge at play in the lead up to its opening. Someone was apparently commissioned to investigate whether there was anything out here worth digging up. The list of things they were asked to 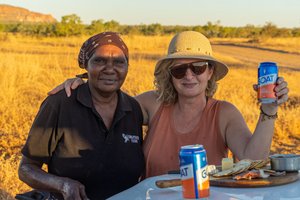 look for was apparently very specific, and included all the usual suspects – iron ore, copper, zinc, uranium, etc. Diamonds weren’t on the list, so when they found them they didn’t feel obliged to tell anyone. They then proceeded to take out a lease themselves, and spent the next several years digging up their fortune. ….well something like that.

We approach the spectacular Bungle Bungle Range – hundreds of characteristic bee-hive shaped rock formations criss-crossed by spectacular deep gorges. It seems that the Bungle Bungles have only been discovered by the outside world relatively recently. The local indigenous folk had been living here for the best part of 20,000 years. They weren’t however overly keen on letting others in on the secret, only to then have thousands of tourists tramp all over their iconic landscape. This all changed in 1982 when the area appeared on a documentary about the Kimberley, and the whole world suddenly wanted a piece of the action.

We land and meet our indigenous guide, Bec. We start our hike through the bee-hives to the mind blowingly spectacular Cathedral Gorge – a virtually completely enclosed amphitheatre surrounded by sheer overhanging red cliffs. The acoustics seem 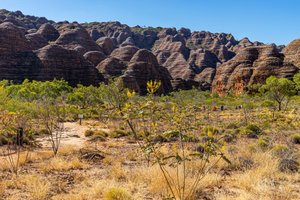 pretty good. Bec tells us that a symphony orchestra once played in here; they lowered the piano in by helicopter. She gives us a mini-concert of her own – hauntingly beautiful singing accompanied by beating sticks.

Bec’s a mine of stories. We ask her how she learnt English. She says the convent nuns beat it into her with a stick across the knuckles. One of her fingers is permanently deformed as a result. Her grandmother was apparently a bit less than impressed with this treatment, and took to the nun in question with a stick of her own. Go granny! What was it with these sadistic sisters – how could they possibly have missed the main part of their Lord’s message by such a long way….. Bec tells us that she didn’t believe that the nuns were really white skinned – she thought they just put a lot of powder on their faces. One of her worst alleged “crimes” was having the temerity to occasionally speak in her own language.

Bec tells the story of being charged with the responsibility of escorting some of the local elders to Perth for an art exhibition. They‘d never really seen too 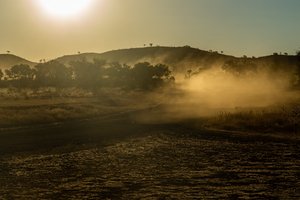 much of western civilisation before, and apparently took a while to adjust. Bec tried to get one of the elders into the lift at the hotel they were staying at, but he wasn’t having a bar of it. He told her he didn’t want a sex change. He said he stood in front of the lift and watched on as the doors opened and a man went in, but the next time they opened the person who came out was a woman. If that wasn’t enough trauma she thought she’d try taking them to the zoo. Their reaction to the elephants was that they looked like pretty funny looking bulls with their horns in the wrong places.

We deposit our gear in our glamping tent at the local wilderness lodge, and Bec then drives us out into the scrub to watch the sunset, accompanied by drinks and a cheese platter. The silence is deafening and the peace is palpable. It’s hard to imagine the day improving from here, but it does in the form of a gourmet three course meal back at the lodge. There are only nine people staying here tonight. I wander away from the camp into 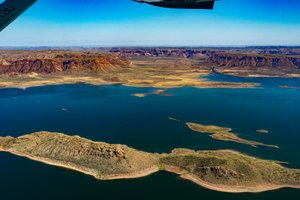 the pitch darkness to try to take some happy snaps of the Milky Way. I think I may have inadvertently set my tripod up in the middle of a road but it’s too dark to be sure, well it was until Bec tried to reverse her car out and nearly ran me over….