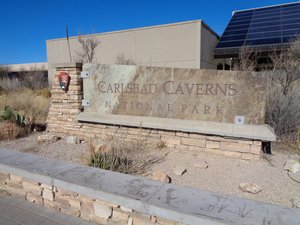 Another early day, alarm at 5 out of bed by 5:30. Today did not have to be an early day since it was not a travel day, but we did want to beat whatever crowds that might be at the caverns. During this time of Covid most sites, including national parks required timed entry so reservations in advance need to be made. We had the first time slot of the day 8:30. It took about 40 minutes to get form our hotel to the park, which is why we got up early so we could shower, have breakfast and head out.

Tarragon was very happy to not have to get in the car today, he got to lounge on his new travel blanket in the armchair in the room.

Breakfast was your typical hotel free breakfast, some sort of egg concoction, potatoes, sausage, etc. We had a quick breakfast then back to the room to get ready to go. It took 15 minutes to put on the new boots I bought, it required assistance as while they are very comfortable, they are not easy to get on.

It was nice day for our outing. It was a sunny 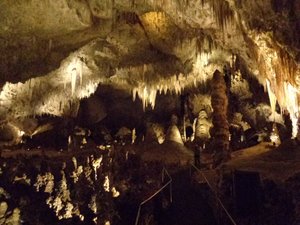 day and in the 50’s, the wind did make it a bit chilly when walking out side, but we also had new coats for this trip (very warm coats) so I only wore mine when we had our picnic lunch later in the day.

I am not really what to blog about here. The caverns are amazing much bigger than the Oregon Caves (not that the Oregon Caves should be missed, they are very beautiful and a much different way). However, the Carlsbad Caverns are huge and tall, the sign said about 6-foot ball lengths in the Big Room. The Oregon Caves are smaller, steeper and narrower. The tour is self-guided so we got to take our time walking around and took tons of pictures (only some are shown here).

There are two ways to get into the Caverns, the natural entrance (same place where the bats come out in the summer) which is a 750-foot steep and winding decline into the Big Room. Apparently, it is the equivalent of walking down a 75-story building. We opted for the other route, an elevator that took you 750 feet down in to the Big Room. Once you exit the 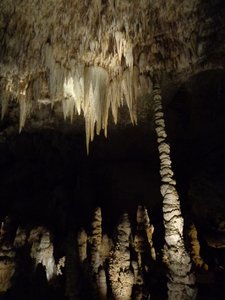 elevator the Big Room loop is 1.25 miles in length. It took us about 2 hours to make the loop as we did not just march through (like most other visitors) but stopped several times a long the way to admire the natural beauty and take pictures. Most of the walk was pretty flat, a few hills now and then but nothing strenuous. The path was also paved so wheelchairs could actually get through probably about 50% of the cave. The Oregon Caves are totally inaccessible for those with mobility issues.

The interesting thing here is that it isn’t really cold in the cave, yes, they recommended a light sweater or jacket but with the walking you I certainly didn’t need that, in fact I was drenched in sweat 15 minutes in, not from the exertion but the humidity, which was pretty high. The experience is not to be missed, it is truly a natural wonder of the world and the formation of the caves began over 265 million years ago when southeast New Mexico and west Texas were covered by an inland sea. 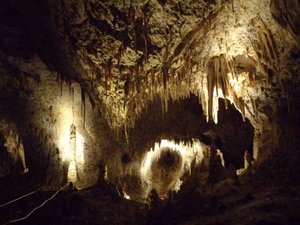 the bats. Over 17 different species of bats make the caverns home at some point during the year, some are hibernating there now as we speak (if we would have used the natural entrance, we also would have been close to the bat cave, which is to close for me.) The most famous bat that seasonally lives here are the Brazilian Free-Tailed Bat. Over 500,000 make it their home and have babies there between February and October. Every night at sunset they fly out of the cave to hunt insects. There is a bat flight amphitheater right where the bats fly out each evening, so you can sit there and watch it happened. I am secretly (maybe not that secretly) glad they were all in Mexico for the winter because I don’t think I can handle 500,000 bats at one time.

We did visit the amphitheater and had lunch. Here is the tip of the day, do not buy lunch at the caverns overpriced and not all that much variety. Instead go to McCallister’s Deli and buy sandwiches for a picnic. They are reasonably priced, made with quality ingredients and were really good. We both had classic clubs (loaded 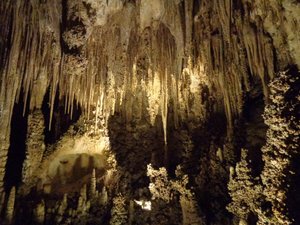 by the way) and enjoyed the sun at the bat amphitheater.

Before Lunch we took a drive around Walnut Canyon Desert Drive. This is a 9 ½ mile loop on a gravel road that takes you from the top of the canyon to the canyon floor. We were completely away from civilization, didn’t even have cell phone reception.

On the way in to the Caverns I spotted a heard of Big Horn Sheep, Jerry totally missed them, there was no place to pull over so I was sure there would be no photographic evidence of this sighting. Fortunately, on the way out, they were in the exact same place (much be a good grazing spot). This time there was a pull over, so we got out of the car and walked back as close as we could get to them and took pictures. Would have like to gotten a bit closer but they knew we were there and seemed a bit nervous, not to mention some of the rams were giving us the eye. It was a great way to end the day at the Caverns.

That was the day, we got back to the room about 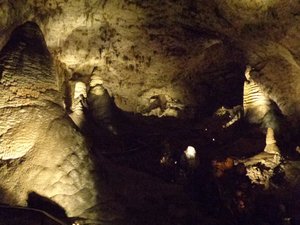 2 after dropping off a post card at the post office. Jerry is doing laundry (complimentary in the hotel) and I am obviously finishing up this section of the blog. I even took a brief disco nap. It is actually nice to have nothing to do but chill. Speaking of chilling, look at the time, it is Wine-Thirty. More after dinner (which is not at Chilis.)

Dinner might as well have been at Chilis, it was not good. The only positives where the food was hot and the service too fast, actually too fast we were done and out before we even got our food at Chilis last night. The server was friendly, if not over attentive, but the food was mediocre at best. Needless to say, there is no dish of the day, except for the Stags Leap Cabernet we had with dinner and are finishing off now. It actually cost more than the dinner.

Just for kicks I will tell you what we had. Jerry started with chicken tortilla soup (not enough spice and way too much in it that didn’t need to be there like zucchini). I started with a Caesar, 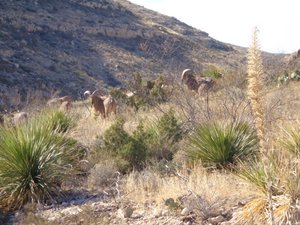 certainly not on the list of the best ever. Entrées were for Jerry the house special meatloaf (nothing special about it) and for me carne asada, seasoned ok but tough as shoe leather. It was served with the smallest serving of rice and beans I have ever had. Jerry had a side of sautéed vegetables, which were not sautéed not even cooked through. He also had a side of baked penne, ok the place as exactly one sauce for all pasta alfredo, which is not alfredo it is basically a bland cream sauce, the funny part was it had cheddar cheese on top.

You clearly do not come to Carlsbad for the food, only for the caverns. After two nights of bad food, we are looking forward to heading north and Albuquerque where the food should be much better.

So, this wraps up the southern portion of the trip as we head to the north central part of the state.