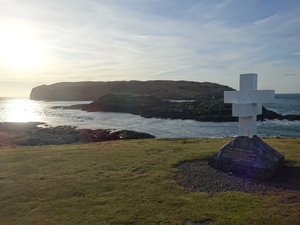 Greetings again! This is my second blog entry for my time on the Isle of Man, and it will relate my adventures on my second full day on the island. It was another wonderful day, rather tiring, but with some amazing views and experiences.

After a wonderful night’s sleep of ten hours, I enjoyed a self-catered breakfast of porridge, pain-au-chocolat, yoghurt and orange juice. I was planning to make the 30-minute journey again on foot to St John’s for my first bus for the day, when upon leaving the annex I happened upon my accommodation hostess. She offered me a lift to the bus stop on her way to work, which was greatly appreciated, and it was just lovely to get to know her a bit more and express my feelings about the cosiness and comfort of the accommodation. As mentioned, my host couple were both Christian, like myself, and we had a wonderful conversation on the c-word situation and how best to react to it from a Christian perspective. Her words of “choose faith not fear” became my motto for my island trip, and will certainly stick in my mind as I navigate through the media- 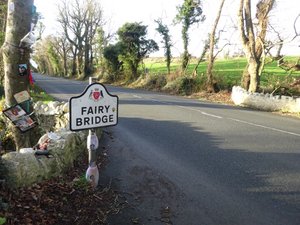 and government-induced panic and fear-mongering that is continuing to occur relentlessly in the UK even after nearly two years of this. There is no way one can continue in a state of fear for so long and not have one’s mental health affected negatively by it, so her words were very welcome, and I continue to choose faith over fear. I avoided the news and the media during my time on the island, and I aim to continue to do so apart from the essential need-to-know bits of information. I was so grateful for this message I received in my lift to the bus stop.

Not long after being dropped off, a bus took me to Douglas Bus Station again, where I switched buses to another one heading south towards Port Erin and Port St Mary, my two destinations for the day, at the southernmost tip of the Isle of Man. The bus route crossed a fascinating bridge called the Fairy Bridge over a little stream winding its way down to the sea from the inland mountains. I got off at the bridge to take a decko, after having read about it in my travel guide before my visit. 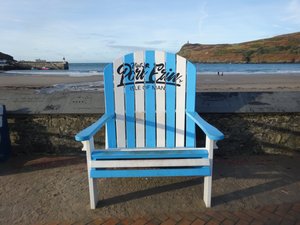 Due to the Isle of Man’s Celtic history, stories of fairies and the fairy kingdom abound on the island, and are still remembered and observed by Manx people today. These are not dainty little fairies with pretty little wings, but small folk around a metre in height, dressed in either green or blue, with red caps and no wings. They remind me of the leprechauns of Ireland. They are not always friendly, and can be both good and bad, both helpful and spiteful, depending on their mood. They are also often referred to as “Themselves” or “The Little Folk”, “Mooiney Veggey” in Manx Gaelic, rather than talked about directly or called by name, as they can take offence easily. Whilst reading more about Manx fairies, I realised that some authors have clearly taken their literary inspiration from these stories. It is believed that local Manx people have been taken into the fairy kingdom over the years as they have walked past various fairy mounds dotted over the island, and few have been lucky to escape. There are also changelings, who take the position of babies in families, and the Manx people have developed several ways of protecting their babies from 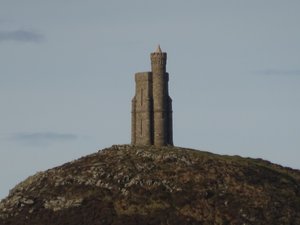 being taken, including baptising them as soon as possible. Both these stories seem to have been learned and interwoven into a children’s book recently published, “The Chime Seekers”, by Ross Montgomery. And even JK Rowling appears to have taken her inspiration from these stories with her inclusion of Dobby and various other house elves in the Harry Potter series – the Manx believe in a solitary and hardworking, but potentially bad-tempered, fairy called the Phynodderree. Manx farmers consider themselves to be lucky if they have one, as they give a helping hand to the farmer’s many labours. However, if the Phynodderree is presented with a new set of clothes by the farmer for his hard work, he will be mortally offended by the gift and instantly disappear. Very similar to the house elves in Harry Potter me thinks…!

Alighting at the Fairy Bridge I was excited. Here, when crossing the bridge, travellers must be extra polite and greet the fairies, for there are apparently many cautionary tales of what may happen to those who don’t. Even the bus announcement system reminded the bus passengers to say hello to the fairies, and actually even said “Hello Fairies” itself as we 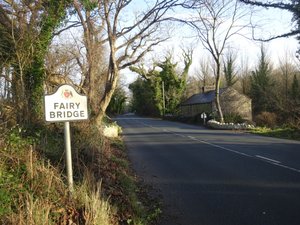 After around 15 minutes at the bridge, I caught the next bus heading further south, past the airport, through the lovely village of Castletown which I explored on my last day, and on to the southern seaside resort town of Port Erin. My plan for the day was to hike the six-mile coastal route all around the southern tip of the island, from Port Erin on the south-west coast to Port St Mary on the south-east. After first exploring the lovely little bay of Port Erin, with dramatic views up the high Bradda Head overlooking the town to the right and topped by the rather iconic Milner’s Tower, it was high-time for some lunch, and fuel for my journey ahead. Throughout my time on the island I was trying to find a place to 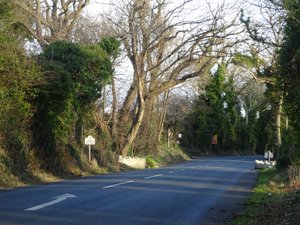 enjoy the most famous Manx delicacy, grilled kippers, but alas I couldn’t find one neither in Port Erin nor the rest of the island. Instead, I had a hearty Full Manx Breakfast at the town’s famous Falcon’s Nest Hotel, which seriously hit the spot. The Manx Breakfast had everything an English Breakfast would have, with the addition of Manx sausage and black pudding. I ate everything apart from these two, as I had no idea what was in the Manx sausage, and every idea what was in the black pudding. The place was very friendly, and I felt ready to begin my hike for the day.

The walk headed up over the headland to the left of the bay, and straight up and along some amazing and very dramatic coastal crags, cliffs, ravines and bays. I must admit I didn’t really enjoy the first hour or so of the walk, as while I was very grateful for the sunny day, the sun was directly in my eyes for the first two miles or so. I needed my eyes there in particular as there were some pretty hairy drops to my right, and the wind was really strong. I spent 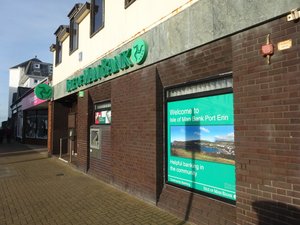 the first hour keeping my eyes open and my balance, and ended up having orange splodges on the inside of my eyelids for the rest of the walk unfortunately. Still, I didn’t fall to my doom, so that was a good thing. The walk then headed to the southerly tip of the island, through a sheep field which I’m never too fond of, and on to the southerly tip of the island called The Parade, so-named as its flatness provided a military training ground for troops in days past. There was a lovely café there called “The Café at the Sound” where I bought an absolutely delicious salted caramel Davison’s ice cream, one of the island’s most famous products and companies. It was a bit chilly to be enjoying ice cream, but I still found a lovely bench with awesome views over the Calf Sound below, the tiny islet of Kitterland in the middle, and the very small Calf of Man island to the south. Since seeing the Calf of Man off the south coast of the Isle of Man on a map as a child, I’d always been fascinated by the name of the place – as if the 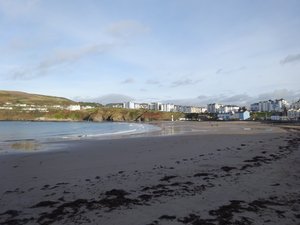 Isle of Man was the cow and the Calf of Man was its little baby. The tiny island is only 1.5 square miles, and is only visited by tour boats during the summer months, being a bird sanctuary home to a number of seabirds including shags, razorbills, guillemots, and in 2021 after a 30-year absence, puffins! I wasn’t able to visit as it was out-of-season, but it was lovely to see the tiny island from the “mainland”. After my ice-cream and rest on the bench, I continued my coastal walk, up a very steep incline to nearby Spanish Head, and towards a place called The Chasms. This amazing place is so-called due to a number of very high ravines mostly hidden by vegetation protruding out over the cliff head and plunging down towards the beach and sea 100 metres below. I figured it would not be wise to explore the area though, since I had not encountered a single other person on this whole walking route, and it just looked so easy to misplace a footing and fall down one of those crazy-deep chasms. The light was also beginning to fade at this time, and in addition there was quite 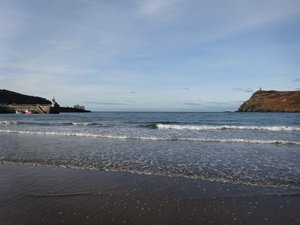 a spooky abandoned café overlooking the site which all urged me to move on with my walk. By this time, I’m not sure whether it was because I wasn’t used to such long walks, or whether the walk was just a really difficult one with all its ups and downs over the high headlands, I was getting really tired and foot-weary. After skirting the next headland, I could see the lights of my end-destination Port St Mary beginning to switch on in the distance in the fading dusk light. I had one final sheep field to traverse, before my feet hit tarmac again, and I hobbled my way through the town looking for a bus stop. I had originally planned to spend a bit of time exploring Port St Mary, the other seaside resort in the south of the island, but a bus just happened to turn up at a bus stop I was walking past, and my aching feet just carried me on board. I did take a quick photo of the town from the bus, however, but I was more than happy to be heading back to my accommodation again after such a wonderful, exhilarating and beautiful coastal 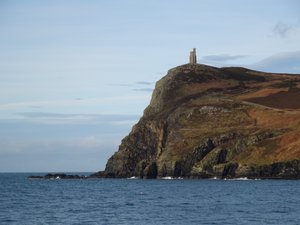 I did not forget to greet the fairies again on my way back over the Fairy Bridge, and arriving back in Douglas, I was just in time for the final bus for the day which runs very rarely up the Foxdale River Valley – perfect!! I wasn’t sure if my feet could manage another 30 minutes of walking from the busy bus route going through St Johns, so I was very grateful when this service dropped me right outside my accommodation.

A glass of brandy was soon poured, and my evening dinner was soon cooking, to end another absolutely wonderful day of explorations on the Isle of Man!

I will write up my final full day, as well as the day of my return journey, in my next and final blog entry on this lovely trip to the Isle of Man.

Until then, all the best for now 😊