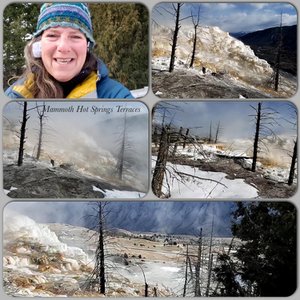 Travertine formations grow much more rapidly than sinter formations due to the softer nature of limestone. As hot water rises through limestone, large quantities of rock are dissolved by the hot water, and a white chalky mineral is deposited on the surface.

Yellowstone National Park, the oldest, one of the largest, and probably the best-known National Parks in the US.

The park was established by the U.S. Congress on March 1, 1872, as the country’s first national park. It is also generally considered to have been the first national park in the world, though some naturalists and others have argued that there is evidence that indicates that the creation of Yellowstone was predated by the creation of Boyd Khan Mountain National Park in Mongolia, which may date from as early as 1778.

Amazing experience to enjoy this beautiful area with http://www.heygo.com